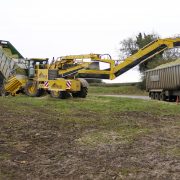 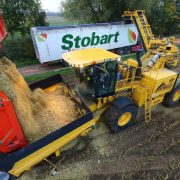 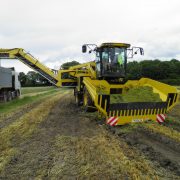 With the ROPA NawaRo-Maus efficiency in the logistics of biomass plants can be significantly increased. Chopped goods such as maize silage, whole-corn silage (or wood chips) are gathered up from the clamp at the edge of the field and loaded on to large lorries.

The load capacity of the euro-NawaRoMaus is around 10 to 15 m³ per minute; the intake
width is currently 8 m. A significant advantage of the design is that the chopper chain in the field is separated from the logistics on the road.

In many cases high power is restricted in the harvesting of silo maize because transport capacities for the removal of harvested goods have too little power or are non-existent. In particular for large bio-gas plants which use a high proportion of maize, the carriage of chopped goods over large distances with agricultural trailers and ground protecting field tyres no longer proves economical in most cases. In accordance with traffic laws for
commercial bio-gas plants the trailer must also possess a commercial permit. As a rule the most cost-efficient option for transporting chopped goods by road is by lorries. However, these should not be loaded in the field and should most definitely not be driven alongside the chopper in the field.

With the implementation of the NawaRo-Maus concept ROPA is now completing the missing link between and effective transport on the field which protects the ground and a cost-efficient and high-performance removal logistics on the roads, using lorries. The chopped
goods are removed with ground protecting trailers or self-propelled machines e.g. converted sugar beet harvesters with low compaction tyres suitable for soil and laid in a clamp at the edge of the field. The clamp on the edge of the field also serves as a buffer so that in the absence of removal vehicles the chopper does not have to stop! Subsequently, with the NawaRo-Maus the silo maize or the whole-corn silage is gathered up from the ground and loaded on to the lorries by a loader up to 13 m from the middle of the clamp.

In practice the loading capacity is up to 15 m³ per minute and due to the variable ground adjustment of the Nawaro pick-up system the losses are negligible. If the NawaRo-Maus and the chopper are on the field at the same time, then as a rule the clamp is always laid in the same place. If the respective load or clamp has been loaded then the NawaRo-Maus drives back and the transport vehicle in the field can tip in the same place again – hardly any
losses are incurred!

The use of the NawaRo-Maus is especially recommended in wet harvesting conditions as this prevents the roads becoming muddy. The separation of chopper and carriage logistics has considerable advantages, not just in the fields but also in the silo plant.

The chopper running time is typically around 14 hours per day with 250 to/h of silo maize.
By using the euro-NawaRoMaus the daily quantity can be supplied to the silo evenly distributed over 24 hours, with fewer removal vehicles. The result is a steadier flow and better compression in the silo.